My name is Els van de Steeg, and thank you for your interest in my story. November 1992 I started my kennel “Temperamental” a Tervueren true for type and temper as a goal… 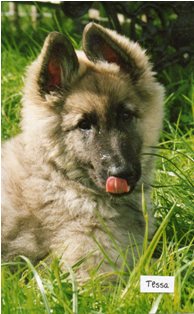 Full of enthousiasm and “blue” I bought my first Tervueren and called her RHAISA. She had a pedigree and I was shure I found her at a quality breeder. Doing the right thing with my shepherd dog with 10 weeks old I started training Rhaisa at KC Gooi & Eemland. And she did me proud and we had so much fun I thought I could try showing her also. Well lets say it was a bit of a disapointment because my beloved Rhaisa turned out not to be so pretty.. So I went to her breeder and told her I looked for a show quality dog. She was kind to help me and I bought my puppy IVY of her. Also a nice working attitude and very brave character Ivy grew up a pretty girl and even won several CAC’s!

Having a great time at training my dogs, worse I felt after being at a dogshow… Even making good scores it seemed my dog was not good enough and people told me Ivy came from a bad breeder (only for the money). But in my oppinion there was much to improve on the showdogs because of their bad characters…
I understood my Rhaisa was not a big asset to the Belgians and so I sterilised her. Ivy nevertheless was almost a Dutch Champion and past her UV, VZH, GG1 and 2 exams. Character test was no problem to her, HD negativ and so I had to find her a good partner I thought. Learning more about the Belgians
I came into contact with Eric 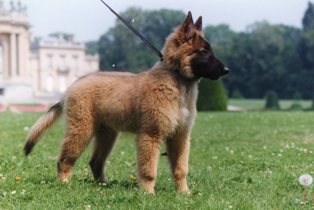 and Liesje Desschans of Kennel Of the Two. In the following years I mated Ivy with their dogs Kouros of the Two and Noahm of the Two. Of the first combination I kept my first male Temperamental Zagacious DYLAN.

I also bought a new female Quercia of the Two and named her NYMPHE. She was my sweetheard, I had never had a dog that was so sweet and true for me. I never met a personality like her…
Nymphe had o 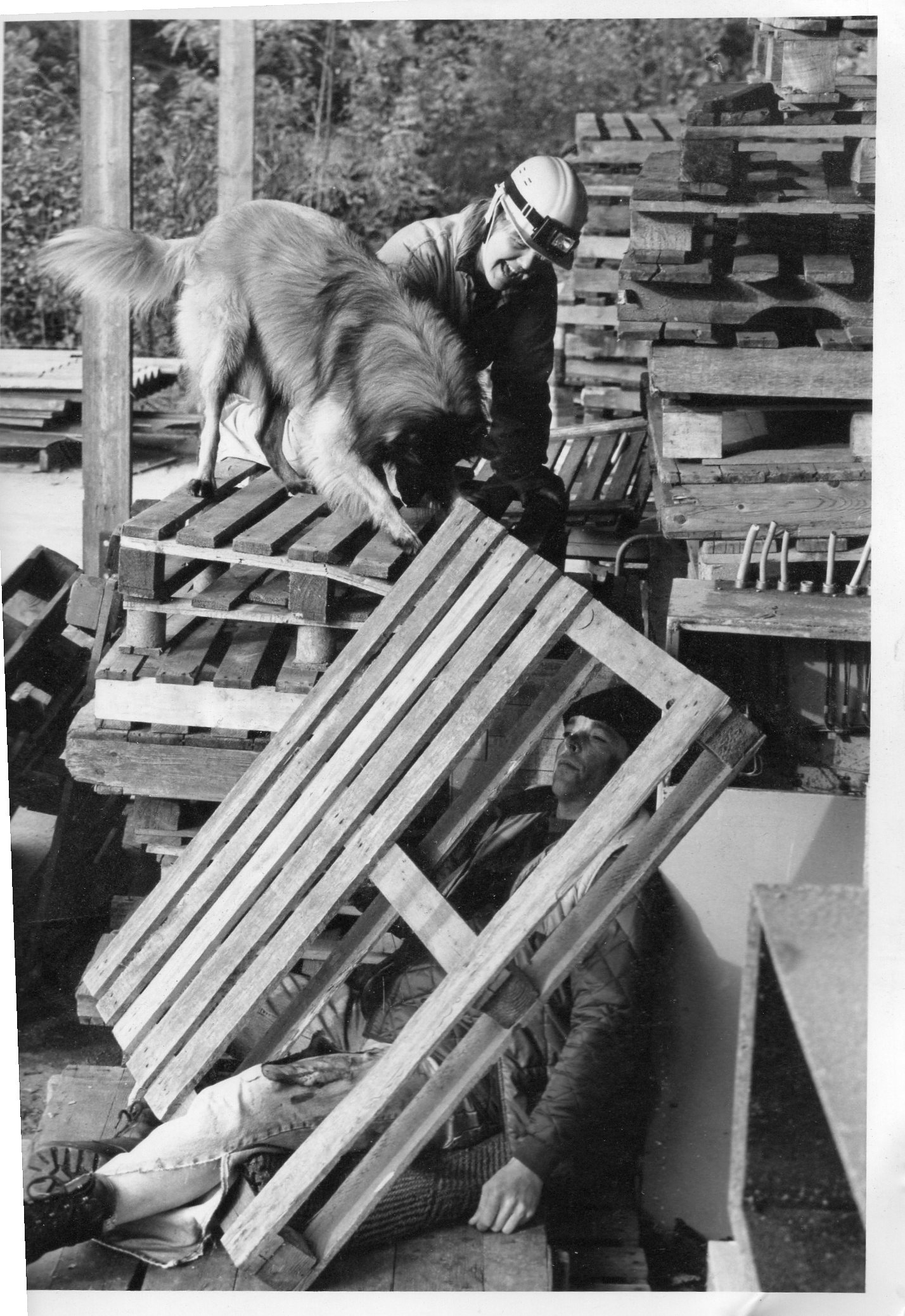 ne litter with Dylan and then when she was 5 years old got an inflamation of the uterus and we had to sterilise her.

“Mixing” the show and working lines turned out allright for some. For example Zany Troy (beautiful grey male) became a rescue dog but also earned his IPO ! Something special to be proud of and many thanks to his owner Marian. Temperamental Xuan Djoery entered his first show at the NVBH specialty and got the RCAC.

"Honesty"
But there were also problems… not only a simple teeth problem but in one combination I had two puppies with hydrocephalus (discovered after autopsy) . I turned to the NVBH breeding comity but they never heard of it…so they say. Talking to other Belgian lovers I found out not all was lovely and a lot of defects and diseases were not spoken of. Not fitting my way of being I can not believe anyone can breed with the wrong dogs on purpouse. But understanding not everyone can handle the truth. Because breeding is not just a simple mix. I studied Breeding and Genetics at Barneveld College, followed KK 1 and KK2 at the Dutch Kennelclub. So I try my best, informing with other Belgian lovers and trusting the knowledge of my friends.…. I decided to sterilise Ivy, I met the love of my live Eddie, moved to the other side of Holland and Nymphe had to be sterilised because of inflamation.

I was done with the breeding stuff, I just wanted to give my dogs a nice old age. Eddie too had dogs and together it was more then enough in one house.

Our Rhaisa died of old age at 16 years. Ivy spend her last years together with her daughter Yucca and was lovingly cared for by Jon, she died at 15.
Dylan had an attack at the age of 8 years and this made him blind overnight. After one week he vomited blood, became very ill and we had to let him go.
My mothers Temperamental grey Layka had been put to sleep at the age of 6

. A simple steralisation revealed that her stomace was full with cancer and turned into a dramatic end of a simple operation. In those days we never heard of stomace cancer.
Nymphe stayed with us untill at age of almost 16 she was so old and blind and got to many ailments we had to let her go. For a short time she even was great friends with puppy Kane.

"The coming of the new generation" 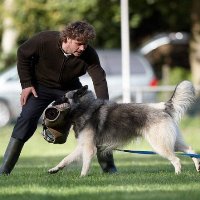 We talked about looking for a Groenendaeler and so we came into contact with Tom Roozen of De Bruine Buck Kennel. By that time there was no Groenendaeler female available but we fell in love with a big grey male! His pedigree name is CLOVIS de Bruine Buck but we call him KANE.

A new great friend entered our lives! Such a happy dog, a big grey clown. He makes us laugh many times , rolling on his back in the grass, all his paws in the air…completely happy with himself.

But he also turned out brave and with the help of Jeroen Vunderink and many training hours with Eddie, Kane past his IPO 1 exam! On shows people know him because of his imposing looks, he is a big boy. Acting like a poodle he wants to be cuddled by everyone.

We are proud to see these happy caracter qualitys in his offspring! 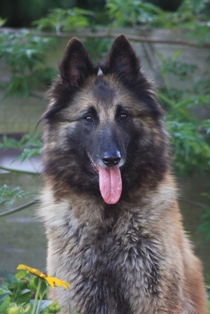 ​earings, with help of Jean Louis and Pauline, we got High Clearings GIVEN, we call her NEUA – a new begining. A pretty and sweet girl, but not happy on the showgrounds. She was judged Excellent but we leave it at that for the time being. Neua is our herding dog, she past the CSAU at the French specialty and does so every day because we also have a few Ouissant sheep around the farm. A quality a good Belgian also has to own. All our childrens friends love Neua, she is a true sweety. 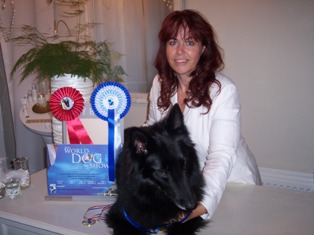 Allmost two years we were at the waiting-list for a puppie of Solitaire (dit Gina) by de Bruine Buck as we recived the happy news. Only one female in the litter and she was ours! Go call me RUNE by de Bruine Buck is our first Groenendaeler girl. We realise how lucky we are, not only she is my shadow and true compagnion, she has won so many times on show… many thanx to Tom, Renee, Ria and Frans for standing by and helping all the time!
With their help we hope to behold all these precious qualitys of Rune in her offspring… 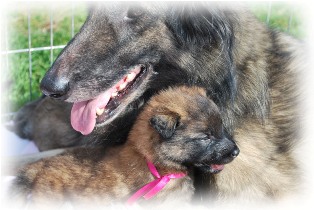 All the way from France came our youngest: ECLIPSE du Bois du Tot. The laughing Houdini dog!
Some Belgians do it, but FEE as we call her, laughs all day.When you call her name she smiles. And no fence high enough she overcomes and opens every door….Unfortunately she is missing a P2 tooth and has a little nod in her tail so we sterilised her. She is the joy of our daughter Lisa Anais who is doing Agility training with her.

Only when we think adding true value to the Belgians we want to breed with our dogs. All our dogs stay in home. When the girls are in heat Kane has to move to his garden house for a few days… but they live socially together in the house, that’s the way we like it. 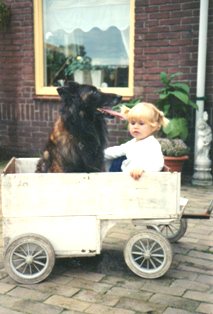 Our dogs grow up together with our 3 children Lisa, Kyrian and Joshua. We own two pretty cats Bumper (a Main Coon) and Fixy (a Ragdoll), a few chickens and Ouessant sheep. Until now everybody get’s along well and understandingly we need our dogs to have good characters. So even if our Kane (from “show-dog” bloodline’s !) has done his IPO, he is also a sweet and kind dog to us, our children and other animals we have. We believe a good Belgian Shepherd is an allround dog (herding, agility, guardian, flyball…) and that’s what’s makes them so very special!

Showing, training and winning is always fun,
but the end of the day they are our dogs we love no matter what…….. 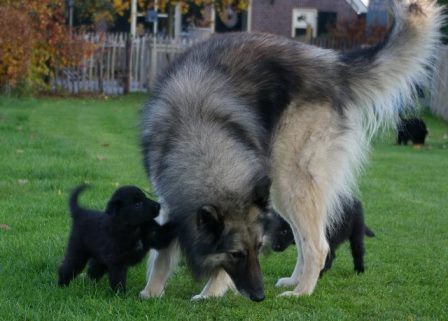